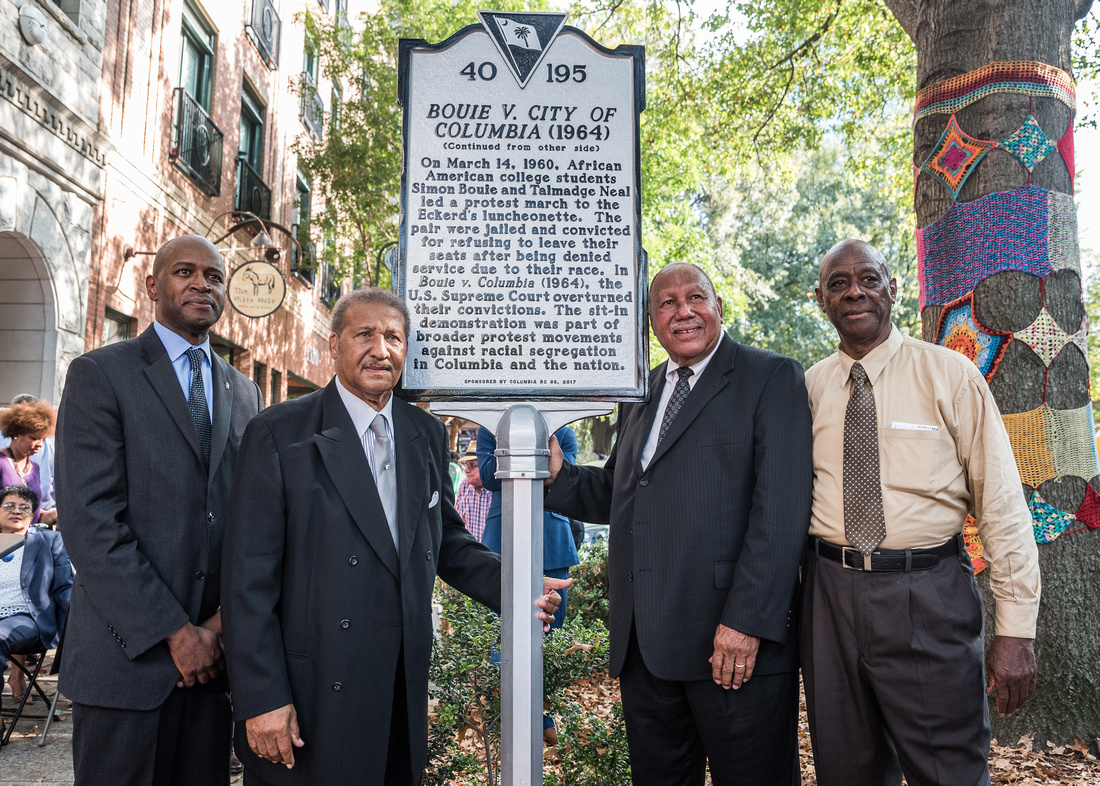 When someone asks about iconic locations of civil rights movements and demonstrations, Columbia may not be the first location that comes to mind. Thanks to the organization Columbia SC 63 (the 63 represents the height of the civil rights movement 1963), Dr. Bobby Donaldson, and the University of South Carolina, Columbia residents are becoming more and more aware of the rich history that took place on our very own streets, transforming Columbia into what it is today.

The first marker unveiling ceremony began at 3pm outside of Hawthorne's Pharmacy and was dedicated to the participants of a sit-in held at the historic Taylor Street Pharmacy (1520 Taylor St.) In 1960's the Taylor Street Pharmacy allowed the purchase of food and goods by both black and white customers however, only white patrons of the pharmacy were able to sit and eat lunch at the lunch counter. On March 15, 1960 five black students from Benedict College made the decision to sit at the lunch counter and wait be served. Little did they know, Charles Barr, Johnny Clark, Richard Counts, Milton Greene, and David Carter would go on to have their names etched in history by refusing to leave at the request of officers after being declined service by the store manager. They were arrested and charged with breaching the peace and criminal trespassing. In 1964 the court case was presented to the U.S. Supreme Court (Barr v. City of Columbia 378. U.S. 146 (1964). The U.S. Supreme Court decided that the arrests and convictions violated their Fourteenth Amendment rights and denied the gentleman the right of due process. There were no grounds for breach of peace as the gentlemen protested in peaceful manner. 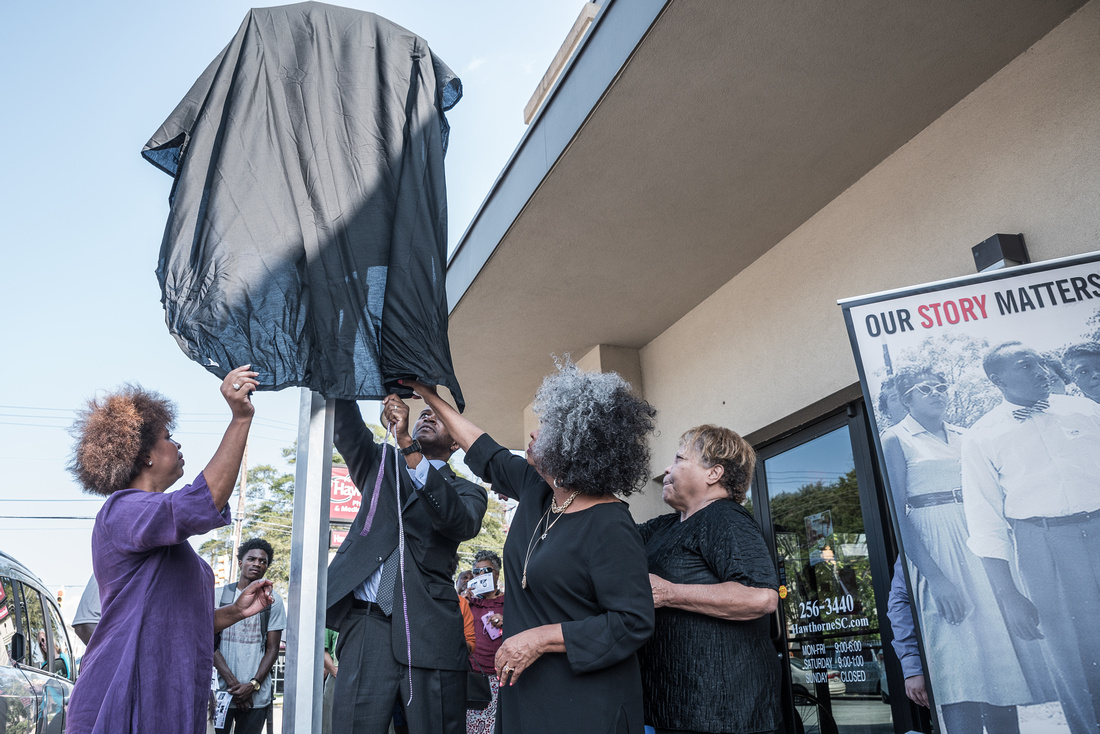 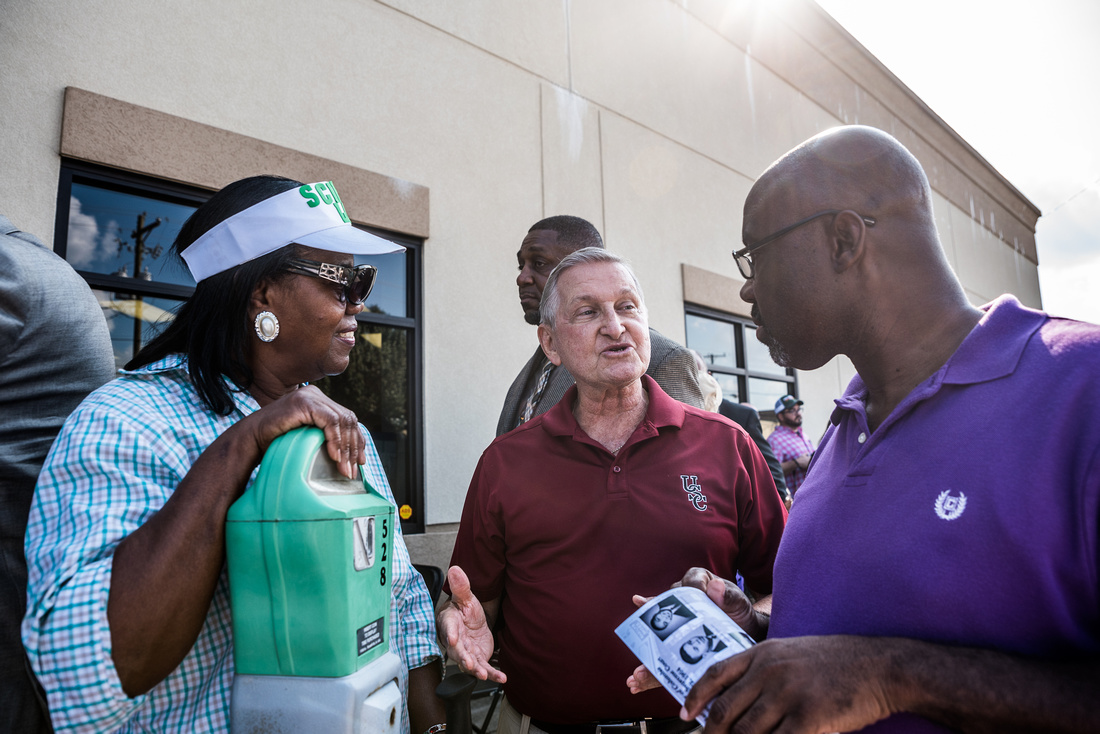 Carl Pete Stokes (center), who was an arresting officer during the sit-in, attends the unveiling ceremony of the Taylor St. historic marker. Stokes who said "Believe it or not, many officers supported the causes back then...but due to the oath we took we had to keep silent and do our jobs." Stokes who was on the scene during a lot of Columbia's civil rights demonstrations and movements says that he has a head full of memories that he wants to get written into a book some day.

The second marker unveiling ceremony began at 3:30pm and was dedicated to the participants of a sit-in held at the historic Eckerd's Luncheonette (1530 Main St.) Like the Taylor Street Pharmacy, Eckerd's Luncheonette allowed the purchase of food and goods but not in store dining by its black customers. On March 14, 1960 Talmadge Neal of Benedict College, and Simon Bouie of Allen University led a protest march to Eckerd's Luncheonette. The two, who were inspired by other student sit-ins that took place in North Carolina, refused to leave after being denied service for attempting to dine-in while black and consequently was convicted for trespassing and a breach of peace. Like the previous case mentioned above (Bouie v. City of Columbia 378. U.S. 347 (1964) would end up ruled on by the U.S. Supreme Court which would argue that the arrests and convictions violated their Fourteenth Amendment rights. Both of these historic cases are used in law school curriculum until this day. 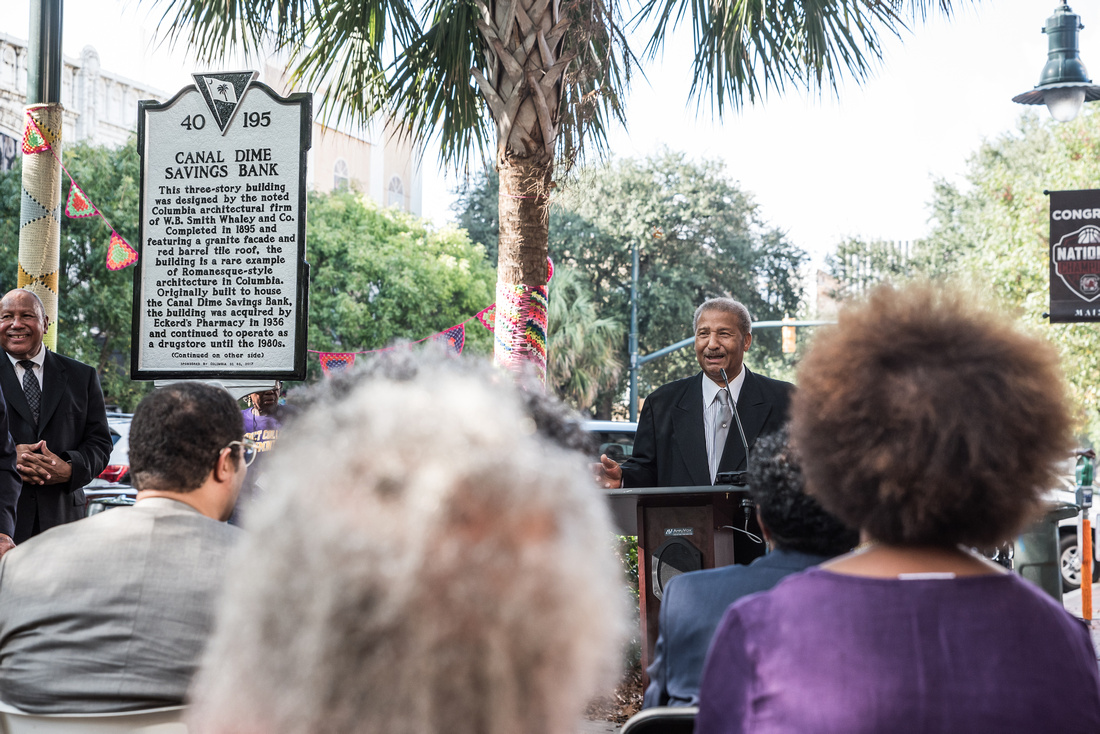 Rev Simon Bouie gives his first hand account of the day that he had on which he and Talmadge Neal were arrested for refusing to leave the Eckerd's Luncheonette. 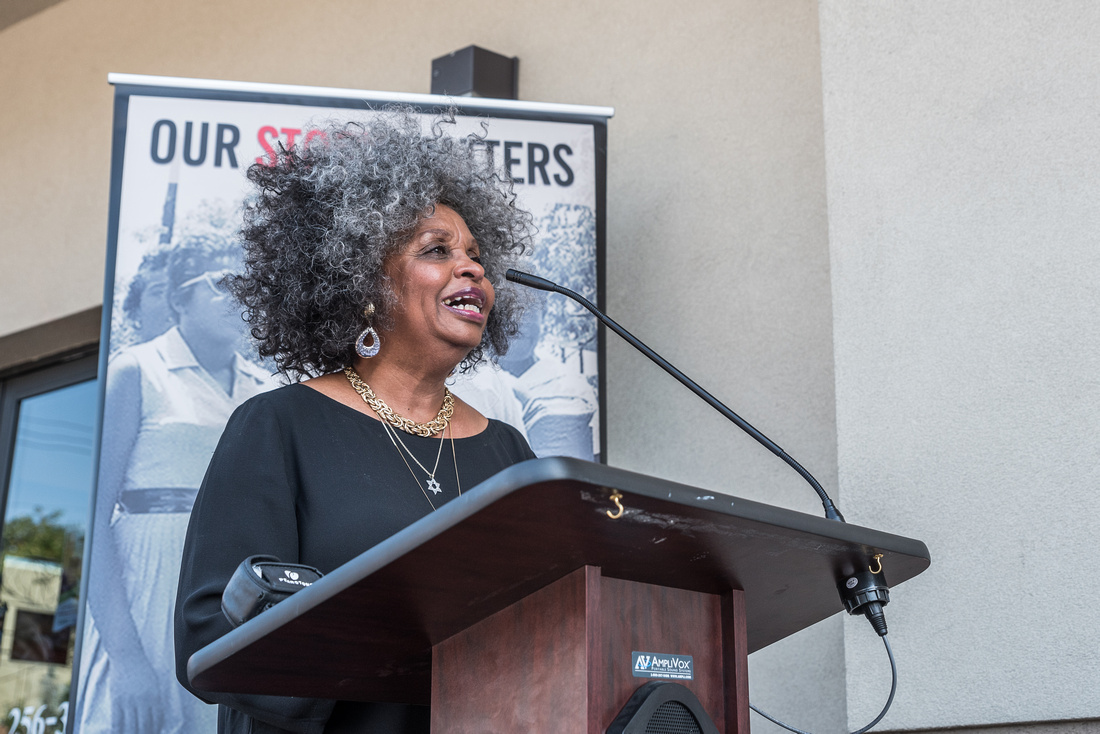 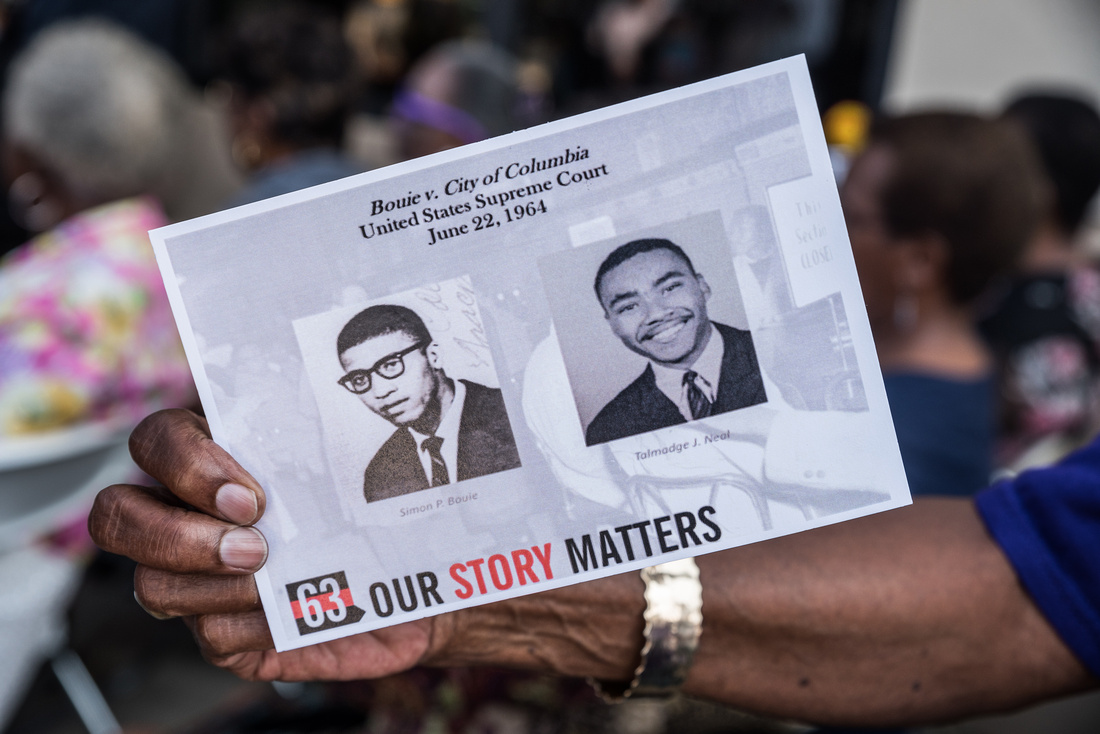 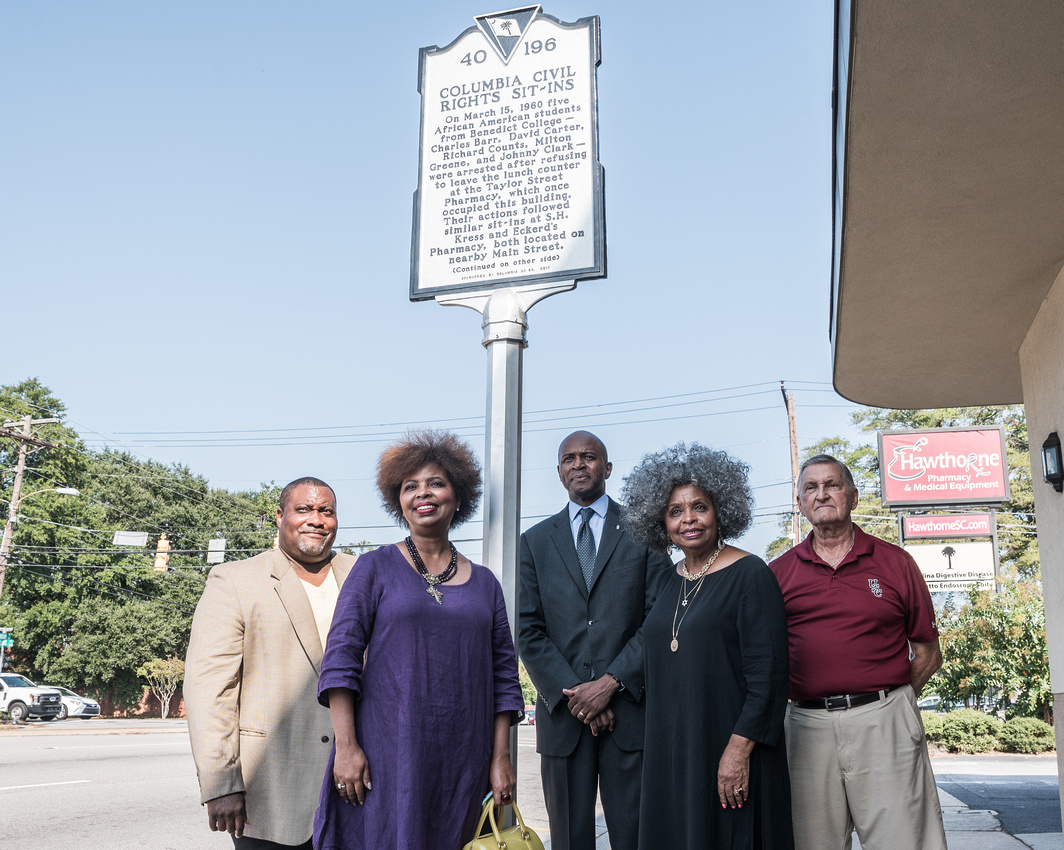 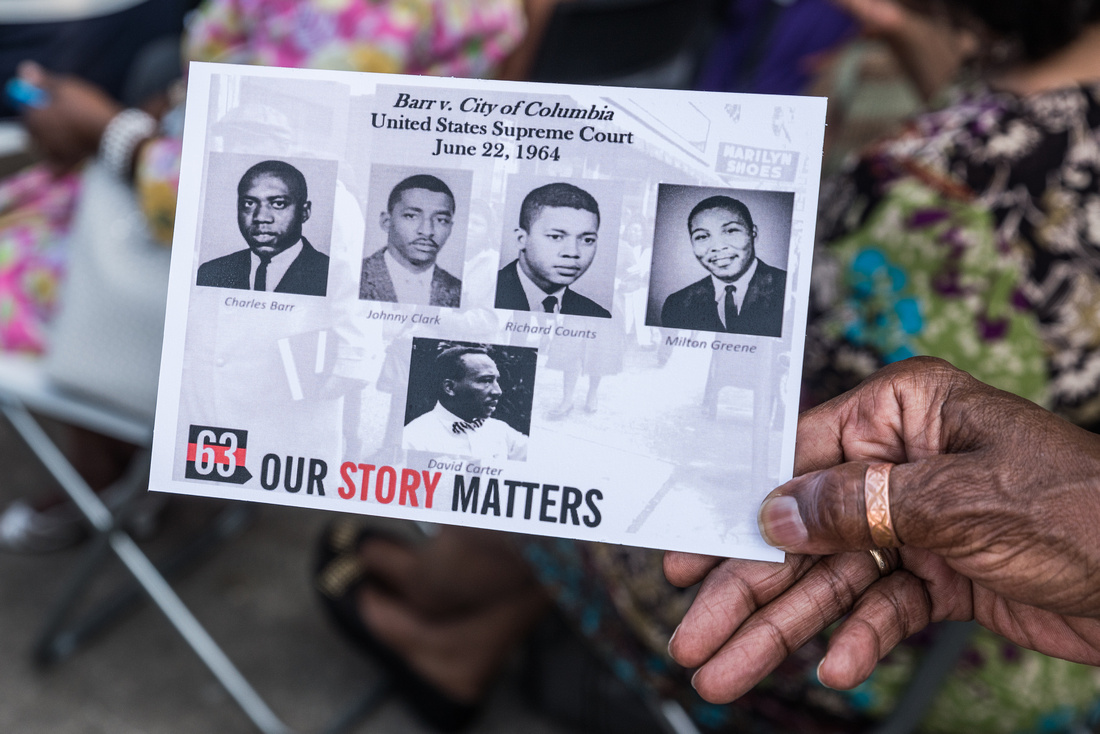 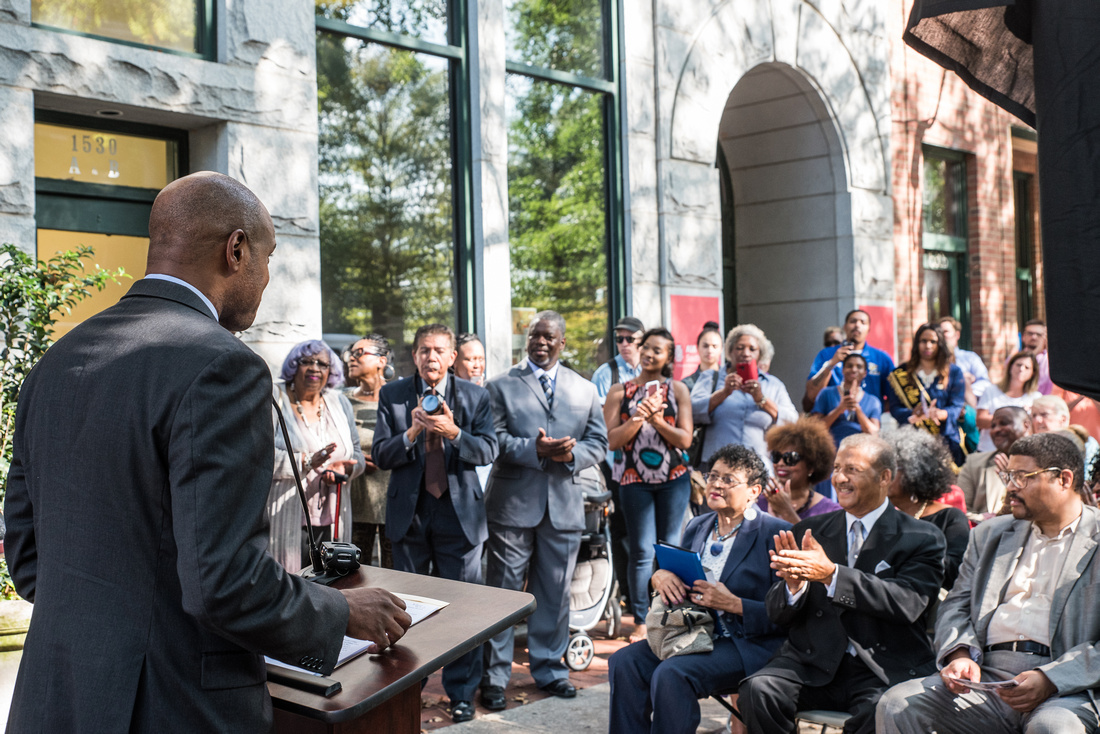 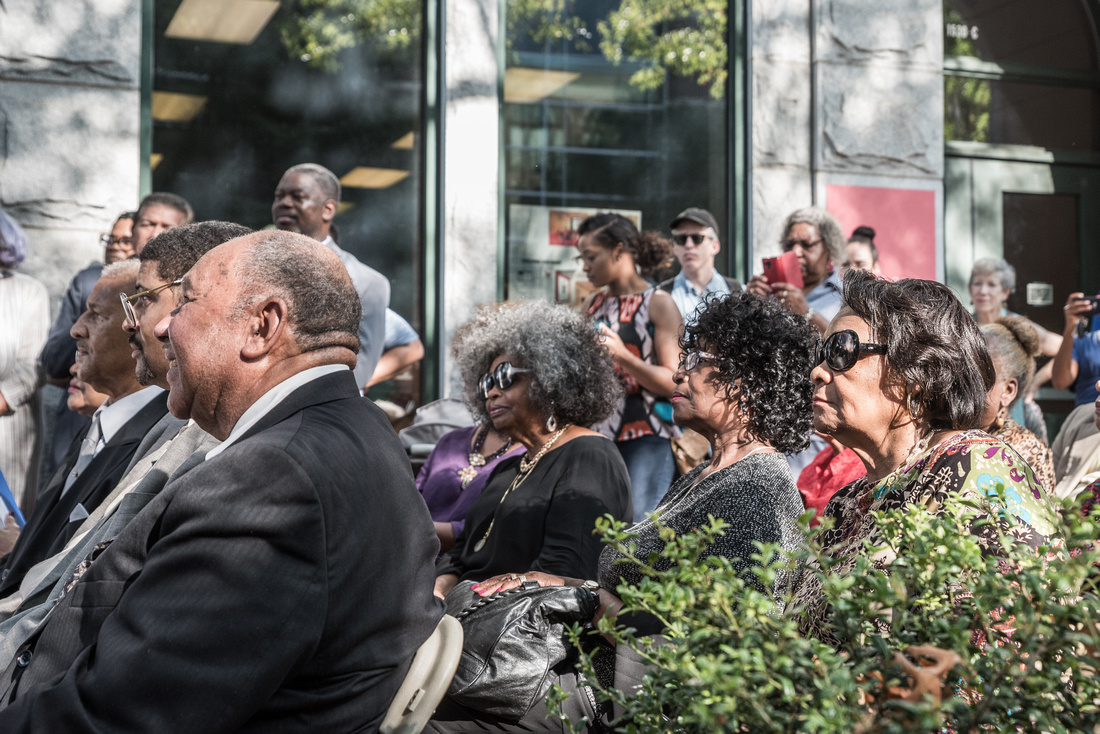 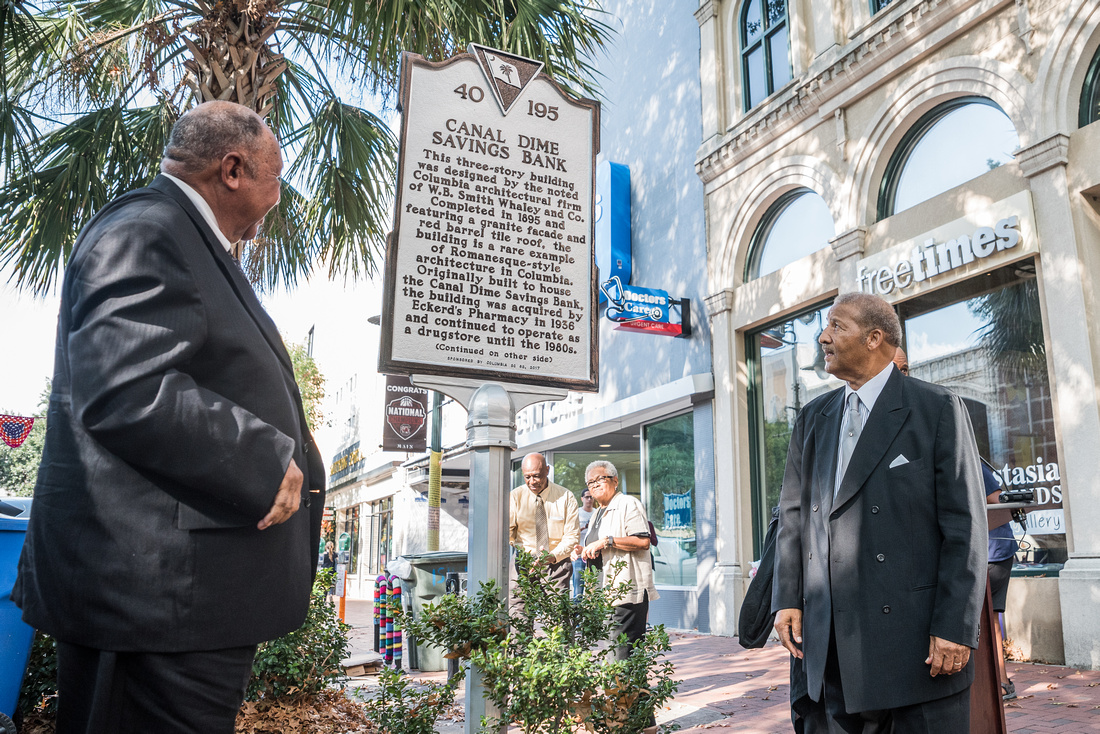 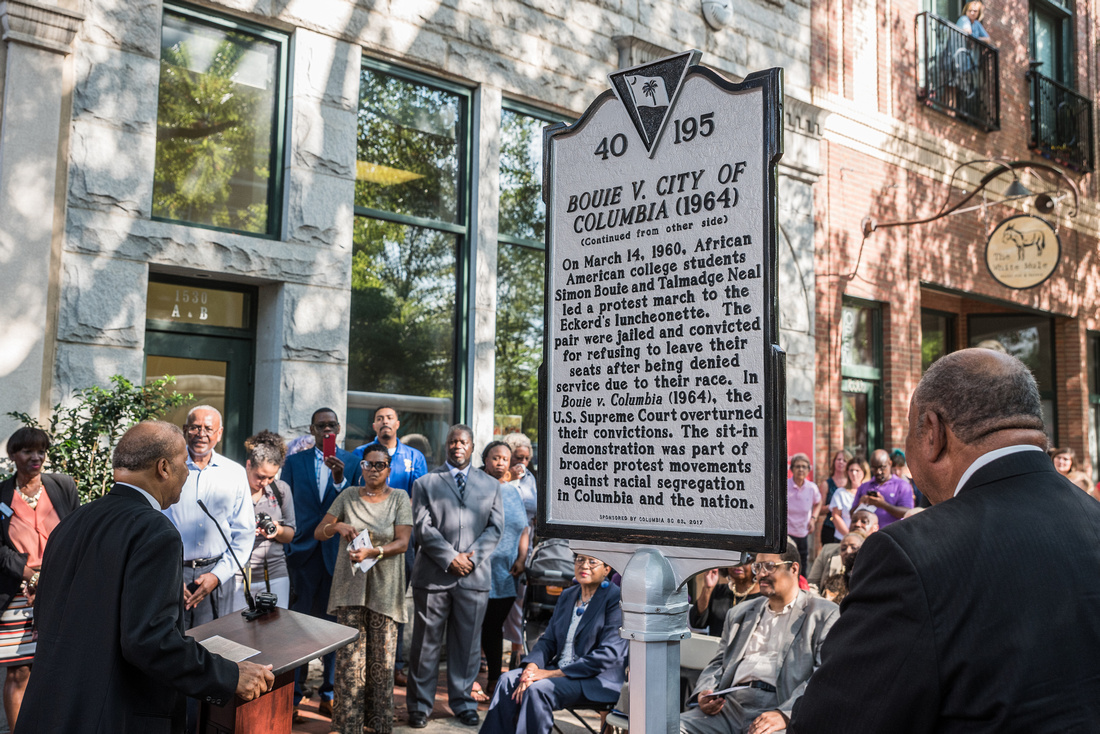 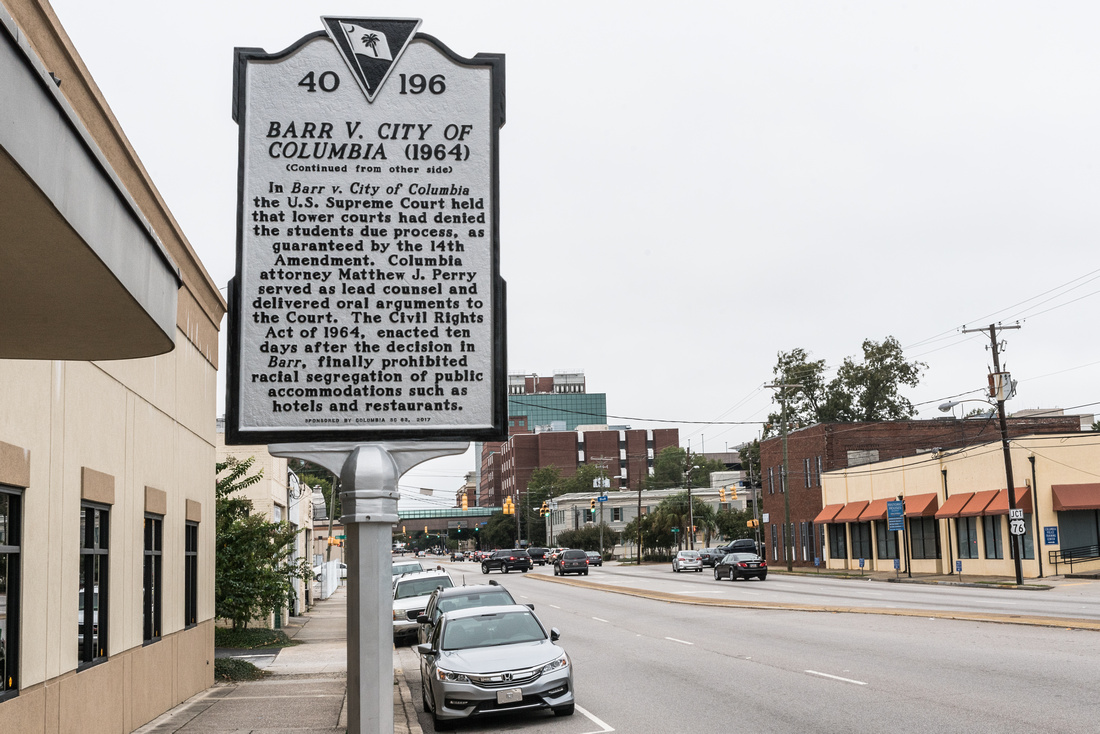 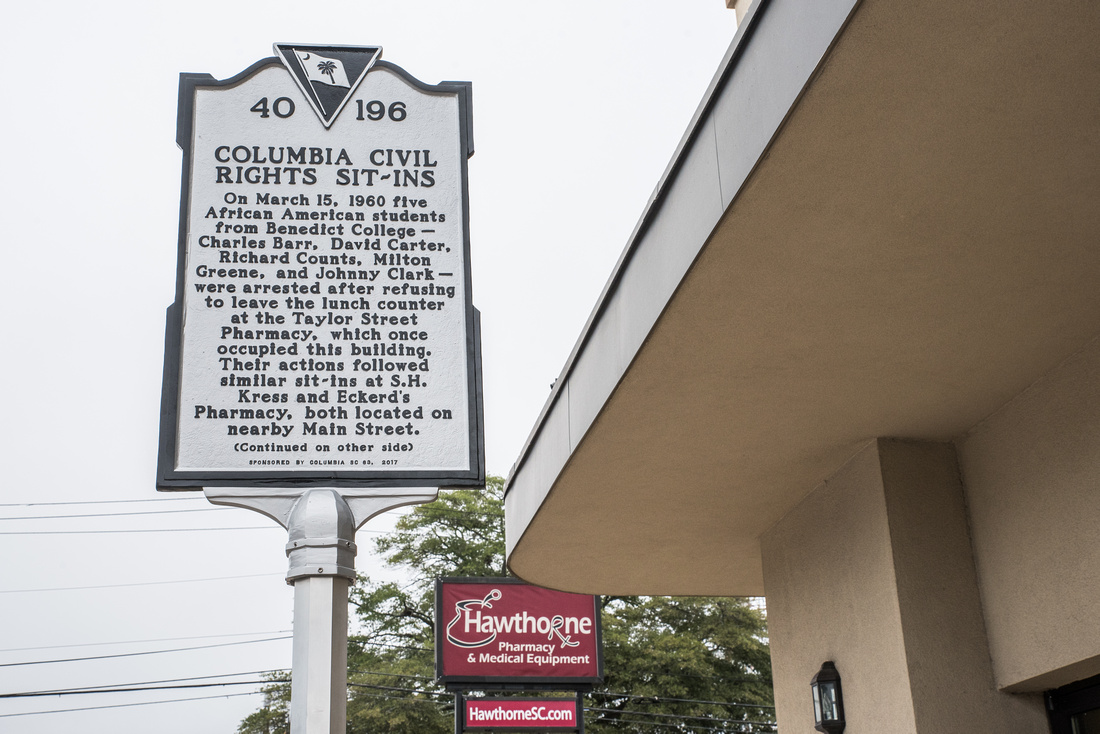 ecoware(non-registered)
hey these pictures are very nice
maradalee(non-registered)
This shuttercrush site has been making about civil rights history and historic markers always,keep it up. Follow the http://www.brillassignment.co.uk/ blog and including the wonderful order assignment and great quality writing services.
Kiara(non-registered)
well thats very interesting to read about Columbia Rights and even I shared this blog with my friends even Everyone should be aware of it.
Doris Greene, widow of Milton Greene(non-registered)
Outstanding photo journalism capturing this historic moment commemorating the brave actions of the seven college students who never once thought they would be remembered in this manner for their quest for social justice. One correction: the unveiling on Taylor Street was done by family members of Milton Greene: his daughter, Retired Colonel USAF Kimberly Greene, his wife Doris Glymph Greene and sister, Patricia Wise Greene. Our heartfelt thanks to Dr Bobby Donalldson, his staff, the City of Columbia, the University of South Carolina, Historic Columbia and all others who made this name possible.
No comments posted.
Loading...
Subscribe
RSS
Recent Posts
Photos: The World is Beautiful When You Go A Little Farther South Carolina Is Under A "State of Emergency" Due to Hurricane Florence. What's Next? Photos: Still Not Quite Yet Over It, SC Secessionist Raise Confederate Flag Again... Beach City Beach, Beach Beach City Beach, SodaCity Made a Beach In Your City Beach Faces of Soda City - Isaac Coakley James Smith Off To Strong Start After Packing Venue During Campaign Kick-Off Unveiling Columbia's Civil Rights History, Two Historic Markers Installed in Downtown Columbia Bring Ye All Thy Tickets! The S.C. State Fair Is Back In Town The Inevitable Rise and Razing of Gonzales Gardens: Thank You For Your Service Park it Like It's Famously Hot: Columbia Creatives Celebrate PARK(ing) DAY.
Keywords
South Carolina Crush Rush photographer Columbia S.C. photojournalist sodacity fun music history family
Archive
January February March April May June July August September October November December
©2019 CrushRush Photography LLC
User Agreement
Cancel
Continue